American Fuels – Opportunities and Challenges for the U.S. Refining Industry 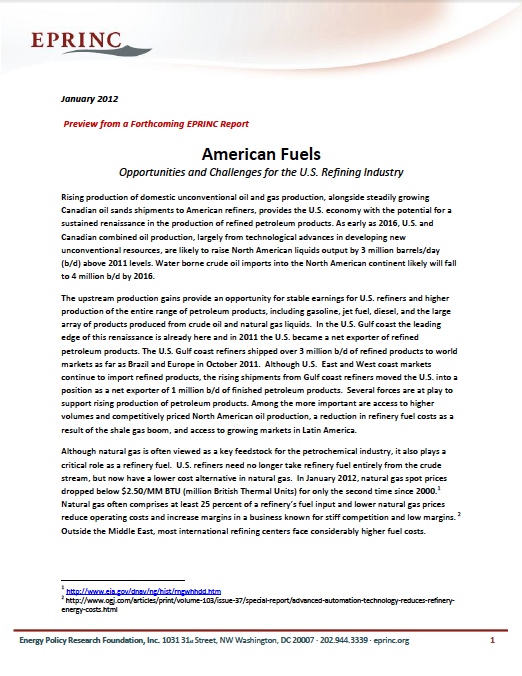 The upstream production gains provide an opportunity for stable earnings for U.S. refiners and higher production of the entire range of petroleum products, including gasoline, jet fuel, diesel, and the large array of products produced from crude oil and natural gas liquids. In the U.S. Gulf coast the leading edge of this renaissance is already here and in 2011 the U.S. became a net exporter of refined petroleum products. The U.S. Gulf coast refiners shipped over 3 million b/d of refined products to world markets as far as Brazil and Europe in October 2011. Although U.S. East and West coast markets continue to import refined products, the rising shipments from Gulf coast refiners moved the U.S. into a position as a net exporter of 1 million b/d of finished petroleum products. Several forces are at play to support rising production of petroleum products. Among the more important are access to higher volumes and competitively priced North American oil production, a reduction in refinery fuel costs as a result of the shale gas boom, and access to growing markets in Latin America.

Although natural gas is often viewed as a key feedstock for the petrochemical industry, it also plays a critical role as a refinery fuel. U.S. refiners need no longer take refinery fuel entirely from the crude stream, but now have a lower cost alternative in natural gas. In January 2012, natural gas spot prices dropped below $2.50/MM BTU (million British Thermal Units) for only the second time since 2000. Natural gas often comprises at least 25 percent of a refinery’s fuel input and lower natural gas prices reduce operating costs and increase margins in a business known for stiff competition and low margins.
Outside the Middle East, most international refining centers face considerably higher fuel costs.

The U.S. has the largest and most complex refining sector of any region in the world. This gives many domestic refiners who have made multi-billion dollar capital investments in upgrading capacity the ability to process lower priced heavy crude oils and produce a product slate commensurate with a less complex refinery running more expensive lighter crude. Increasing production from the Canadian oil sands provides such refineries with the heavy crude oils well-match to their complexity. Meanwhile, shale oil from the Williston Basin (Bakken), Eagle Ford and a multitude of other emerging domestic unconventional oil plays are providing less complex refineries with access to light sweet crude oils, replacing imported crude from Africa.

There are also important regional disparities in the domestic refining industry. In EPRINC’s 2009 assessment on the impact of the Waxman-Markey cap-and-trade bill on the U.S. refining sector, the report evaluated the severe low margin environment faced by some U.S. refiners. EPRINC concluded that without substantial changes in the domestic regulatory and business environment, over 2 million b/d of U.S. processing capacity would be idled or closed.
Some closures are now underway, largely in the east coast (PADD I). PADD 1 is facing the loss of 700,000 b/d of capacity by 2012 from 2008 levels. About half of that 700,000 b/d is already idle. Also, the closing of a 350,000 b/d refinery in the U.S. Virgin Islands was announced last week. PADD 1 refineries rely almost entirely on waterborne imports of higher-priced sweet light crudes and must compete with large volumes of gasoline imports from European refiners. In Europe widespread dieselization for transportation fuels has left the continent with excess gasoline and short supplies of diesel. Large volumes of gasoline and gasoline components are routinely shipped and priced to enter PADD I markets. In addition, demand for refined products in PADD 1 has declined by 1 mm b/d since 2006. This accounts for approximately half of the nation’s total petroleum demand decline during 2006-2011.

These closings make for an uncertain supply outlook for PADD 1 refined products, particularly as low sulfur heating oil specifications take effect in the Northeastern United States. Some supplies will be shipped from the U.S. Gulf coast to the Northeast via pipeline where capacity is available. Additional shipments could be made via barges from the Gulf coast, but the availability of shipping solutions under U.S. law are limited and will likely mean PADD I will have to look towards product imports from foreign refinery centers to meet some product requirements.

Despite the low refinery margins in PADD 1, Europe has been taking the brunt of the rationalization of Atlantic basin refining capacity. Approximately 1 million b/d of European capacity have been closed since 2009 and another 1 million b/d are at risk of closure and/or sale and financial restructuring. European refineries are characterized by much less complexity that their U.S. counterparts and rely heavily on higher-priced water borne deliveries of crude oil imports from Russia, Africa and the North Sea. The recent disruption of light sweet crude supplies from Libya added to cost pressures facing European refiners.

Outside of PADD I, most U.S. refineries are at least partially insulated from low margins prevalent among Atlantic basin refineries. Rationalization of capacity throughout the Atlantic basin will raise utilization rates among much of the remaining U.S. refining fleet and ongoing investments promise continued improvements in operations. The U.S. refining sector also has the advantage of producing a high yield of middle distillates such as diesel which sell at a premium to gasoline. Growth in global demand for middle distillates has outpaced growth for all other major refined products and the U.S. will remain an important supply source for products from the middle of the barrel. In recent years, U.S. exports of distillates to the world market have ranged from 500,000 to 1 million b/d. Although the U.S. continues to import some gasoline blending components, in late 2009 it became a net exporter of finished gasoline. This can be attributed to reduced U.S. demand for gasoline, strong utilization rates outside of PADD 1, and ethanol supply growth.

The American downstream renaissance is not guaranteed. A range of existing and proposed environmental regulations and proposed changes to the tax code are the largest threat to the competitiveness of the U.S. refining industry. A long list of pending and proposed regulations offer an enormous challenge to the future of the industry and how policy makers and the industry adapt to this challenge will be a critical factor in whether the U.S. economy realizes the full range of security and economic benefits from expanded production of petroleum products. Among the more important regulatory developments evaluated in the report are the proposed Tier III gasoline specifications, growing and costly adoption of volumetric increases in biofuel mandates under the Renewable Fuel Standard, proposed controls on green house gas emissions, low carbon fuel standards, and substantial changes in the tax treatment of product inventories. In addition to the uncertain regulatory environment, predictable and cost-effective government policies will be required so that necessary capital can be deployed to build out the large scale investment in transportation infrastructure to bring planned increases in Canadian and unconventional supplies to U.S. refining centers as well as timely construction of refinery upgrades to process these growing supplies of North American crude oil.