The Cost of Banning No. 6 Oil in New York City 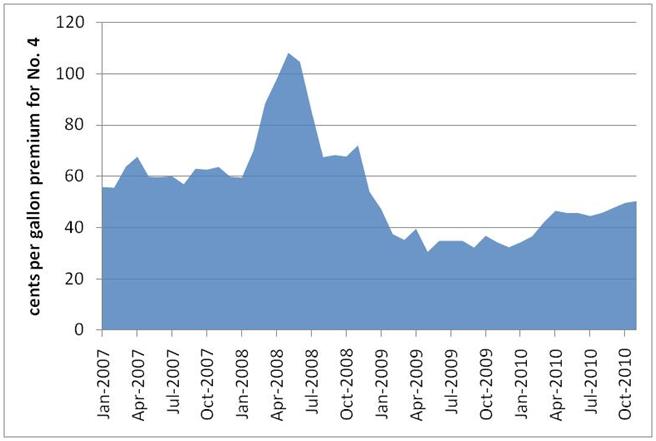 However, local petroleum product markets are not immune to turmoil in world oil markets as is now taking place in Libya. The loss of Libyan crude exports, a major producer of light sweet crudes, will shift short-term output towards higher yields of No. 6 oil relative to No. 2 oil in world refining centers with the resulting escalation in price differentials between the two fuels.   As a result, a period of sustained price escalation in world petroleum markets could see fuel costs in some neighborhoods rise by over 70 percent. In New York City rent stabilized housing, landlords may pass fuel costs on to consumers.

Introduction and Summary of Findings

The City of New York is proposing to ban the use of No. 6 fuel oil (residual fuel oil) in heating boilers located within the city. The proposal would require building owners to switch to a low-sulfur 1,500 parts per million (ppm) No. 4 oil blend by 2015.  The switch from No. 6 to the low-sulfur No. 4 oil blend would require approximately 10,000 buildings to upgrade their boilers to accommodate the new fuel.  It is estimated that upgrades will cost a minimum of $10,000 per boiler.  Fuel costs will likely increase by at least $0.50 per gallon as a result of the need to blend relatively expensive ULSD No. 2 fuel oil (Ultra Low Sulfur Diesel) in high concentrations (60% by volume) to meet No. 4 sulfur specs.  ULSD is in high demand nationwide as it is also the only legal on-road diesel fuel.  ULSD is more expensive than No. 6, which is a relatively low-cost fuel limited primarily to stationary uses in the northeastern United States, and is more susceptible to price and supply shocks.   As the city’s heating oil sector will be competing for ULSD supplies with the nation’s diesel truck and vehicle fleet, heating oil costs and volatility will increase.

Higher fuel costs will be passed along to city residents.  Under New York City law, landlords of rent stabilized apartments may pass on fuel costs adjustments to residents.  EPRINC estimates that fuel costs for residents in buildings currently consuming No. 6 fuel oil, given the average historical price spread between No. 6 fuel oil and the proposed No. 4 blend, will increase by 35% for an effective rent increase of $42.70 per month per housing unit.  Fuel costs are the second or third largest cost component of rent, depending on borough, and the transition to No. 4 oil will most dramatically affect lower-income residents whose rents could increase by over 10%. (See Table 3)

In a high oil price environment residents may see fuel costs increase significantly more than 35%.  In 2008 residents would have seen fuel costs rise by 70% had they consumed the proposed No. 4 blend rather than No. 6 fuel oil.  This would have raised rents by over $85/month per unit, an annual cost increase of over $1,000.  As oil prices increase the price difference between No. 2 and No. 6 tends to increase.  This makes No. 2, and in turn No. 4, relatively more expensive than No. 6.

Fuel costs for burners switching from No. 6 to No. 4 will rise due to the introduction of ULSD into their fuel supply.  Since 15 ppm ULSD in 2007 became the legally established on-road diesel fuel, it has sold for a premium of as much as $1.80 per gallon over No. 6 fuel oil and never less than $0.50 more per gallon.  From January 2007 through November 2010 the ULSD premium averaged $0.92/gallon.  The U.S. currently consumes about 3.3 million barrels per day (mm b/d) of ULSD but only 0.5 mm b/d of No. 6 fuel oil.  U.S. refiners have already attempted to minimize production of No. 6 fuel oil as it is a niche product limited mostly to northeastern heating oil, power generation, industrial, and maritime use.  It currently accounts for about 4% of average U.S. refinery yields.  It generally sells below the cost of crude oil, meaning refiners lose money on every gallon sold.  However, due to the composition of crude oil it cannot simply be eliminated from refiners’ product slates and will remain a marketed fuel.

The new restrictions on the use of No. 6 fuel oil will require all boilers now using No. 6 to transition to a blend of No. 4 and No. 2 to meet the new standard.  Current No. 6 users will have to move to a 1500 ppm sulfur No. 4 blend consisting of 40% No. 6 oil and 60% ULSD (15 ppm No. 2). This change will increase the net fuel costs to former No. 6 users by $0.55/gallon based on historical average price spreads.  Figure 1 below shows the historical price difference between No. 6 and the proposed No. 4 blend.  It does not account for the lower energy content of the No. 4 blend, which is about 4% less than No. 6 fuel oil.

Figure 1. No. 6 and Proposed No. 4 Price Difference

New York City government and residential buildings are estimated to consume 227 million gallons per year of No. 6 fuel oil.  Table 1 below shows annual fuel consumption and cost increases as a result of the proposed rule. Boiler upgrades would add at least an additional $100 million in one-time expenses.

Table 1. Estimated NYC No. 6 Fuel Oil Annual Consumption and Fuel Cost Increase as a Result of the Switch to No. 4

Where the Burden Hits the Hardest

However, when costs are broken down by borough, fuel is shown to represent a significantly higher share of costs in the lower income boroughs outside of Manhattan than in Manhattan.  Across the boroughs, nominal fuel costs are relatively flat; Manhattan residents spend nearly the same amount on fuel as residents of the Bronx.  But for the average Bronx resident fuel represents a much higher share of rental costs than the average Manhattan resident.  Because landlords of rent stabilized buildings can pass-through “fuel cost adjustments,” an increase in fuel costs will likely be passed to consumers.  Low income residents will be most affected as fuel costs represent a relatively larger share of rent.

Of Bronx, Brooklyn, Manhattan, and Queens (data for Staten Island is not available), fuel costs as both a share of rent and operating costs are lowest in Manhattan, the borough in which mean per capita income is highest.  Manhattan’s average fuel cost is also lower than the citywide average, meaning not only do Manhattanites pay relatively less for fuel, they spend less overall.  As a result, lower income boroughs will be most detrimentally affected by a switch from No. 6 oil to more expensive No. 4 oil, in terms of both absolute expenditures and relative costs.

This increase will be most severe in the Bronx, Brooklyn and Queens.

The following table shows monthly cost increases and the cost increase as a share of rent for the Bronx, Queens, Manhattan, and Brooklyn.