The Future of the U.S. Refining Industry Under Waxman-Markey

EPRINC has released an executive summary of its forthcoming report examining the future of the U.S. refining industry under the American Clean Energy and Security Act, also known as the Waxman-Markey bill.

A PDF version of the executive summary can be downloaded here and is posted on our publication page. The full report will be posted on our website later this week.

EPRINC has evaluated the economic consequences to the U.S. refining industry of the American Clean Energy and Security Act (ACES), H.R. 2454, also known as the Waxman-Markey (W-M) energy and climate bill.  The legislation calls for controlling emissions of greenhouse gasses (GHGs) by placing a price on GHG emissions.  The bill passed the House of Representatives on June 26, 2009 and companion legislation is under discussion in the U.S. Senate.

Under the Waxman-Markey bill, both manufacturers (refiners) and importers of  transportation and other fuels derived from crude oil would be required to purchase allowances to account for the carbon dioxide (CO2)emitted into the atmosphere as a result of combustion of these fuels beginning  in 2012, two years before any free allowances are distributed.  Allowances could be bought and sold under the legislation’s cap and trade program.  U.S. refiners are responsible for approximately 45% of all emissions covered under Waxman-Markey which will regulate emissions from 86% of the U.S. economy by 2016.

U.S. refiners, but not importers, would have to purchase allowances for stationary source emissions (emissions released at the refinery for the production of refined products).  Under the legislation, U.S. refiners would receive some free allowances beginning in 2014 and ending in 2026 to assist in transitioning to a higher cost operating environment, but these allowances are small compared to the total obligations under the program as shown in Table A below.

Table A. Emission Allowances for U.S. Refineries under Waxman-Markey for Selected Years

(millions of metric tons of CO2 per annum)

*Actual emissions for the entire U.S. will be higher as ACES covers only 86% of the U.S. economy. Does not include allowances allotted to small business refiners, 0.25% of the free allowance pool.

EPRINC evaluated the extent to which the W-M legislation would raise operating costs and the likely adjustments that would take place both to domestic  operating capacity and to direct and indirect employment throughout the refining sector.  The major conclusions of the report are as follows:

Figure A. Domestic Refining Capacity at High Risk of Closure from Cost Increases

Figure B. Domestic Refining Capacity at High Risk of Closure from Cost Increases 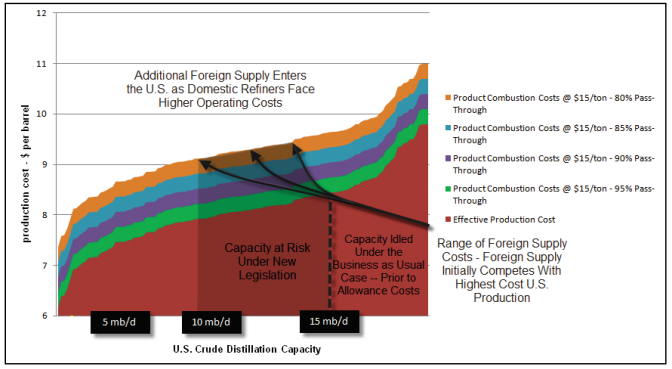 Table B.  Pass -through, Capacity Closures, and Employment Losses from Product and Stationary Allowance Costs – $15 per ton of CO2